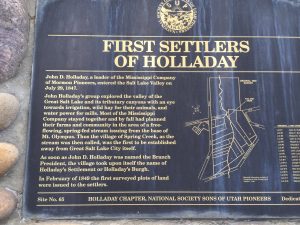 ay, a leader of the Mississippi Company of Mormon Pioneers entered the Salt Lake Valley on July 29, 1947.

John Holladay’s group explored the valley of the Great Salt Lake and its tributary canyons with an eye towards irrigation, wild hay for their animals, and water power for mills.  Most of the Mississippi Company stayed together and by fall had planned their farms and community in the area of a free-flowing, spring-fed stream issuing from the base of Mt. Olympus.  Thus the village of Spring Creek, as the stream was then called, was the first to be established away from Great Salt Lake City itself.

As soon as John Holladay was named the Branch President, the village took upon itself the name of Holladay’s settlement or Holladay’s Burgh.

In February of 1849 the first surveyed plots of land were issued to the settlers. 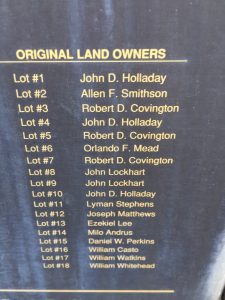 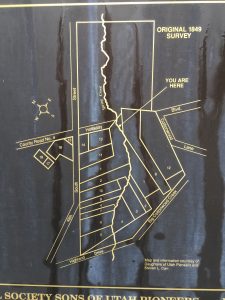 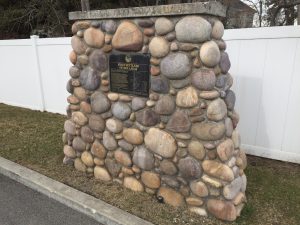 Sometime in the spring of 1848, the very first Holladay settlers-to-be came to this area and established a community. The location was soon called Holladay’s Burgh after its founding pioneer captain, John D. Holladay.   The name was later shortened to Holladay.  One member of the original group of settlers was William Decatur Kartchner, born in Pennsylvania and later a resident of Illinois.  He wrote in his journal: “Spring arrived; we were to farm as we had traveled, by tens, fifties, and hundreds. The land our ten drew was on a high bench six miles southeast of the city and our captain, John Holladay Sr. He asked permission from his captain to locate three miles further south at a large spring. It was granted, and soon we moved out there, built a row of small houses and fenced a field.”  1 These “ten” that William referred to were members of the Mississippi Company of Pioneers that had traveled together to Salt Lake City.

For these new settlers, life in this area was hard in those early years.  Despite mental toughness, hard work and cleverness, hunger was common.  William Kartchner wrote what it was like that first 1848 spring and summer in Holladay:  “During this time our breadstuff gave out. We had our last ox killed, an old favorite of mine. I could not kill it myself, it would be like killing one of my family.”2   His neighbor took pity on him and killed it for him but it was “poor beef” and William had to boil it with thistle roots to make it better.

Sharing food was a way of life in order for the group to survive.  William only brought a “few kernels of corn” with him across the plains so he waited until May to plant them.  He planted Spanish corn kernels which sprouted, grew and produced enough corn to make enough flour for “sufficient bread for three families.”  He also planted wheat which grew and he was able to share with the group captain and his family.   When Brother Holladay came to William and asked ‘Brother William, what under heavens are we to do for bread?   William pointed to his ripening wheat and replied “there is bread”.  Hunger served to remind William of how critical farming became in this desert environment.  He wrote:  “At that time I had not tasted of bread or any substance of grain for nearly two months.”3

Despite the hard won survival of the first few years, most of these original settlers did not stay long.  It was not because they did not like the area but because of another call for settlers to move to California.  In order to spread out and create new settlements, LDS church leadership asked for church members to establish a community in California.  The promise of a warmer climate interested many Southerners – including John D. Holladay.  So in the spring of 1851, just three years after arriving in Holladay, many of the original Mississippi group of ten and others packed up and traveled 700 miles to San Bernardino. 4

About these Mississippi Mormons who were the first settlers of Holladay, The historian Leonard Arrington offered this assessment :  “Intelligent and resourceful, [the] southern women accomplished miracles in establishing homes and rearing their families. . . . Mostly small landowners, stockmen, and frontiersmen, [the men]…became Brigham Young’s trusted associates in managing men and resources for the development of Mormon settlements”. 5