Placed By: Daughters of Utah Pioneers, 1930. 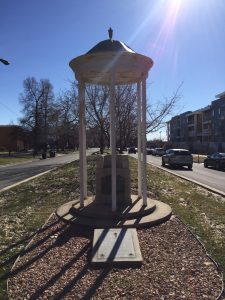 Plaque A: “LONE CEDAR TREE Although willows grew along the banks of the streams a Lone Cedar Tree near this spot became Utah’s first famous landmark. Someone in a moment of thoughtlessness cut it down, leaving only the stump which is a part of this monument. ‘In the glory of my prime I was the pioneer’s friend.’”

Plaque B: “THE CEDAR TREE SHRINE Erected July 24, 1933 by Daughters of Salt Lake County The street to the north was originally Emigration Road- the only approach from the east. Over this road the pioneers of 1847 and subsequent years entered the valley of the Great Salt Sea. They found growing near this site a lone cedar and paused beneath its shade. Songs were sung and prayers of gratitude offered by those early pilgrims. Later the cedar tree became a meeting place for the loggers going to the canyons. Children played beneath its branches. Lovers made it a trysting place. Because of its friendly influence on the lives of these early men and women we dedicate this site to their memory.”

Extended Research: According to Utah lore, Mormon pioneers arrived in the summer of 1847 to find the Salt Lake valley completely devoid of trees, save for one cedar tree toward the very north end of the valley. This legend is indeed interesting, but the controversy surrounding the tree (which was likely a juniper tree rather than a cedar tree) that arose during the twentieth and twenty-first centuries are perhaps more intriguing than the remains of the tree itself.

From the outset, it seems highly unlikely that this tree was the only one in the valley; in an extract from letters written by John R. Young, pioneer of 1847, to his grandson, the former writes: “From our cabin in the mouth of City Creek canyon, in 1847, one could see a lone cedar tree on the plain southeast of us, and on the south fork of the creek, about where Main and Third South Streets intersect, stood seven, wind swept, scraggy cottonwood trees. On the north side of City Creek stood a large oak tree. No other trees were visible in the valley.”[1] Here it seems that while there may not have been many trees in the valley, there were at least a handful in the central area of what would become downtown Salt Lake City. The tree stood alive in its original spot, serving as a meeting place and welcome shelter from the high desert sun, until it eventually died and was moved to the middle of 600 East by the Daughters of Utah Pioneers in 1933. On July 4 of that year, the Daughters built a monument to the tree with a protective structure over it; the monument originally included a large portion of the trunk of the tree. Plaque B is the original plaque that was laid in 1933 by the Daughters. On September 21, 1958, vandals chopped down and stole a considerable portion of the tree from the monument, leaving only the stump of the Lone Cedar Tree remaining. The vandals were never found, and there was no extensive effort to search for the stolen remains of the tree.[2] In 1960, the existing memorial was expanded upon and plaque A was added to explain the vandalism and why there was a monument to a tree that didn’t really exist anymore. 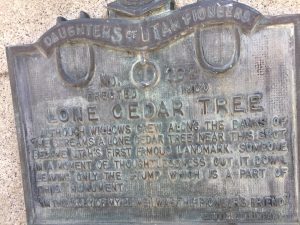 Though the narrative of a lone cedar tree sheltering the pioneers and offering a signal from God that they had finally arrived at the right spot is compelling, the majority of available evidence suggests that the legend was fabricated. As mentioned above, several pioneers noted in journal entries the existence of other trees not just in the valley, but in the general vicinity of Lone Cedar tree. In his article “One Hundred Years at the Utah State Historical Society,” historian and author Gary Topping takes a critical view of the Lone Cedar tree myth, raising several points contradictory to some of the assertions made on the plaques at the location. Topping notes “it is botanically unreasonable, in view of the stands of box elder and cottonwood trees along modern stream banks, that only one lone juniper would have existed there in 1847.” He also remarks that if the tree had actually been the only one in the valley, it would have been a rather conspicuous place for ‘trysting lovers’ to meet.[3]

Topping also explores the consequences that belittling the Lone Cedar Tree myth had on the former director of the Utah Historical Society, Russ Mortensen. Shortly after the trunk of the tree was cut down by vandals, a Deseret News reporter phoned Mortensen to ask for his thoughts on the vandalism, then changed the tone of the conversation by asking if Mortensen believed that the tree was the only one in the valley in pioneer times. Mortensen sealed his fate by confidently responding “Hell no, do you?” The reporter responded by publishing an excoriating article about Mortensen, claiming that the tree “symbolized the willingness of the pioneers ‘to suffer, even to die, for the accomplishment of holy purposes,’ the editor added that the tree ‘represented kindness, shelter, hospitality—all given freely and withheld from none, redmen or white.’”[4] This excerpt seems to generally sum up the justifications provided for the myth of the Cedar Tree: regardless of the veracity of the myth, the tree is a symbol of pioneer heritage and proof that the Salt Lake valley was God’s chosen habitat for the Mormons.

We need not view the story of the tree as inscribed on the plaque as literal truth, but an idyllic metaphor for the hardships endured by the pioneers as they foraged their way out west. The original plaque laid by the Daughters of Utah Pioneers showcases the tree as a welcome reprieve from the hardships of pioneer life, and a meeting point where happy memories were made – and that is how the tree should be remembered.