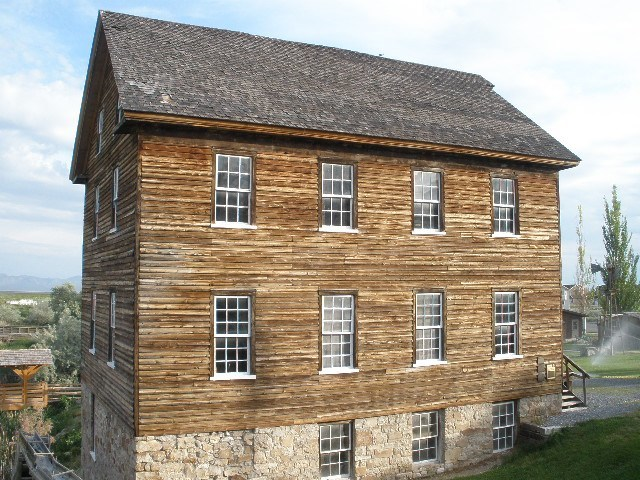 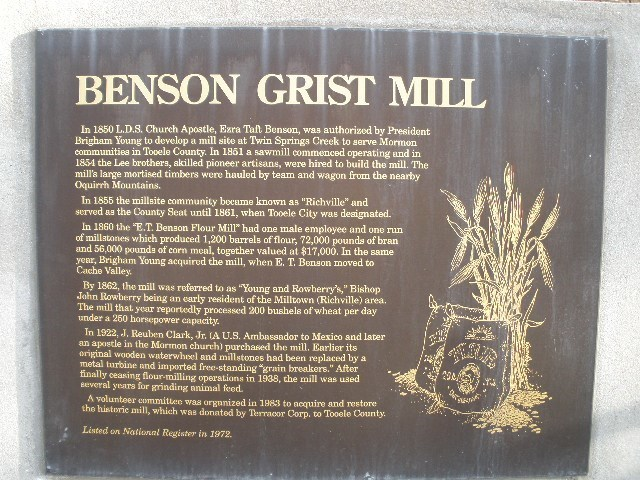 BENSON GRIST MILL In 1850 L.D.S. Church Apostle, Ezra Taft Benson, was authorized by President Brigham Young to develop a mill site at Twin Springs Creek to serve Mormon communities in Tooele County. In 1851 a sawmill commenced operating and in 1854 the Lee brothers, skilled pioneer artisans, were hired to build the mill. The mill’s large mortised timbers were hauled by team and wagon from the nearby Oquirrh Mountains.

In 1855 the millsite community became known as “Richville” and served as the County Seat until 1861, when Tooele City was designated.

By 1862, the mill was referred to as “Young and Rowberry’s,” Bishop John Rowberry being an early resident of the Milltown (Richville) area. The mill that year reportedly processed 200 bushels of wheat per day under a 250 horsepower capacity.

In 1922, J. Reuben Clark, Jr. (A U.S. Ambassador to Mexico and later an apostle in the Mormon church) purchased the mill. Earlier it’s original wooden waterwheel and millstones had been replaced by a metal turbine and imported free-standing “grain breakers.” After finally ceasing flour-milling operations in 1938, the mill was used several years for grinding animal feed.

A volunteer committee was organized in 1983 to acquire and restore the historic mill, which was donated by Terracor Corp. to Tooele County. 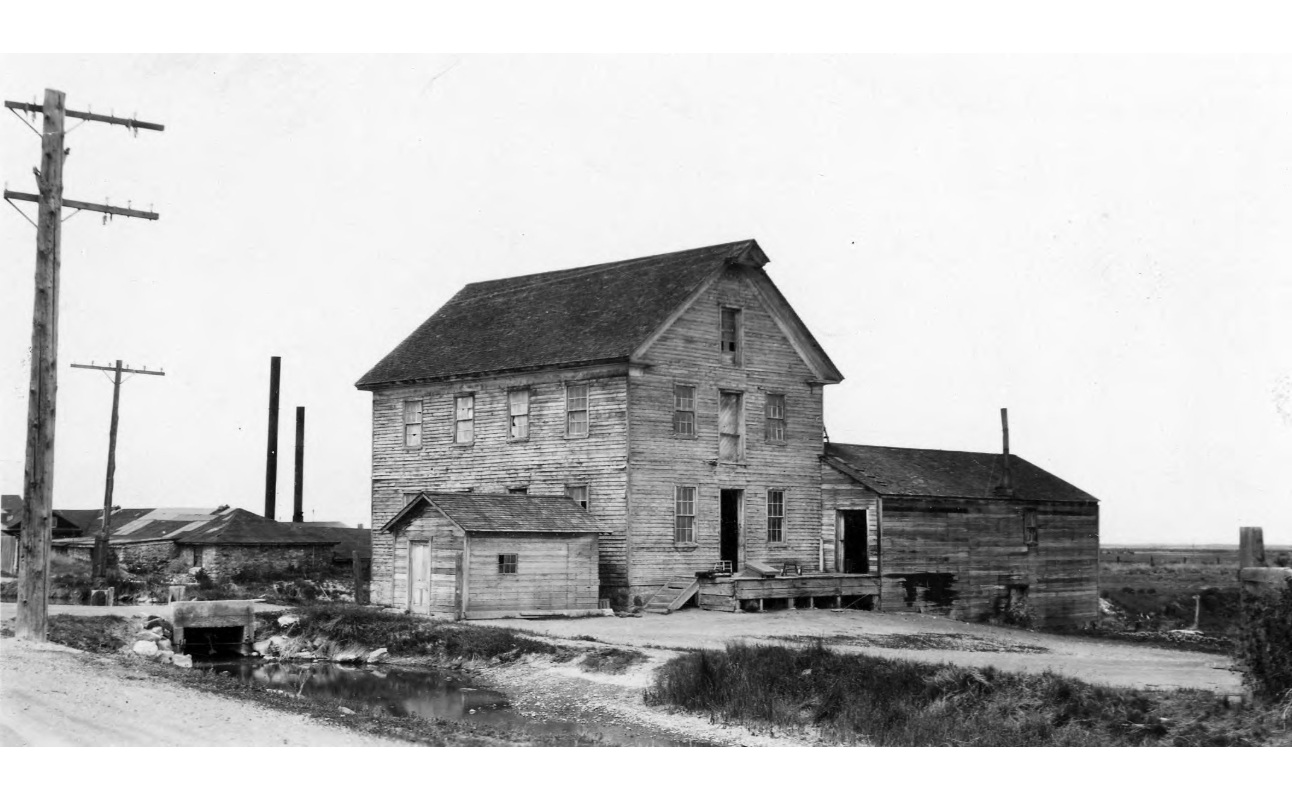 Apostle Ezra Taft Benson, the original founder of the mill, was one of the first to arrive in Utah alongside Brigham Young’s pioneer company in 1847. After arriving in Utah, he was shortly sent back to Missouri where he helped prepare more Latter-day Saints for the trip to Utah.[1] He stayed in Missouri for two years until he eventually made his permanent move to the Salt Lake Valley in 1849. Ezra Benson would then help settle what we now call the Tooele Valley.

Cyrus Tolman is also important in this early history of the Benson Mill, as according to local history Tolman brought a load of straw and shingle timbers to Brigham Young to show the natural resources located in Tooele Valley.[2] This helped convince Brigham Young to sign off on milling and timber rights to Ezra Benson, Anson Call, Josiah Call, and Judson Tolman. In return these men promised to help develop roads to the new facilities. Due to the rich supply of timber, and grain grown by early settlers, milling operations were quickly attracted to the Tooele Valley

Benson hired brothers Cyrus and Judson Tolman, along with millwright Phineas Wright to find locations for mills and to begin construction. New Settlers to the area built their first homes around Benson’s sawmill in an area they called Settlement Canyon. These shelters were quickly abandoned, as a “Fort” was created due to hostilities with nearby Native Americans.[3]

Latter-day Saint carpenter Thomas Lee and his brothers constructed the Benson gristmill in 1854. John Rowberry supervised construction and then maintained the mill for the owners, a group of people that included Rowberry, Ezra Benson, Benjamin Crosland, and other church leaders.[4]

Settlers relied heavily on the Benson Mill in its early years, with reports describing workers there grinding as many as 6,000 bushels of wheat, 1,000 bushes of corn, and 228,000 pounds of flour.[5] To the right is an ad in the Deseret News written in 1857 advertising the Benson Gristmill. It mentions short notice grinding at any time of the year.[6]

Ownership of the Mill has changed several times throughout the decades. In 1860, Ezra Benson sold off his two-thirds share to Brigham Young. Young’s brother Lorenzo was interested in the mill and constructed an adobe home across from it. A conflicting story reports that Ezra Benson acquired sole ownership of the mill in 1866. It is thought that this was done in order to protect the ownership of the mill in behalf of the LDS church, as around this time the Church was being investigated by the federal government for polygamy.[7]

J. Reuben Clark Jr., an apostle in the LDS church, then purchased the Gristmill in 1922. Alterations were made to the mill including exchanging its original wooden waterwheel for a metal turbine, and its millstones were replaced with “imported free-standing ‘grain breakers’”. It ran all the way until the 1940’s, being used for grinding animal feed. Terracor, a land development company, then acquired the Gristmill. For roughly 40 years the mill sat abandoned until Terracor donated the building to Tooele County.

The Benson Grist Mill Restoration Volunteer Committee created by Jack Smith, and consisting of members Wayne Shields, Boyd and Ouida Blanthorn, Ray Court, Bob and Marilyn Shields, Douglas Smith and Maxine Grimm, worked hard to return the Gristmill to its current condition. Today, the mill is used as a setting for field trips, weddings, reunions, and other social gatherings. “The site, complete with covered picnic tables, has become a virtual village as well as a roadside park. It hosts a replica miller’s house, historic cabins, a granary, a large barn and all manner of other buildings, plus several wagons.”[8]

Boren, Ray. “The Benson Grist Mill is a Rugged Monument to a Dynamic Pioneer Past.” Deseret News (Salt Lake City), May 17, 2012.