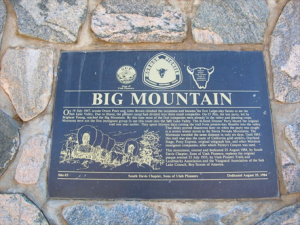 -Write up by: Grace Fahey

Placed By: Sons of Utah Pioneers 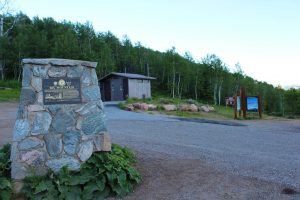 “On 19 July 1847, scouts Orson Pratt and John Brown climbed the mountain and became the first Latter-Day Saints to see the Salt Lake Valley. Due to illness, the pioneer camp had divided into three small companies. On 23 July, the last party led by Brigham Young reached the Big Mountain. By this time most of the first companies were already in the valley and planting crops. Mormons were not the first immigrant group to use this route into the Salt Lake Valley. The ill-fated Donner Party blazed the original trail one year earlier. They spent thirteen days cutting the trails from present day Henefer into the valley. That delay proved disastrous later on when the party was caught in a severe winter storm in the Sierra Nevada Mountains. The Mormons traveled the same distance in only six days. Until 1861, this trail was also the route of California gold seekers, Overland Stage, Pony Express, original telegraph line, and the other Mormon immigrant companies, after which Parley’s Canyon was used. This monument, erected and dedicated 25 August 1984, by South Davis Chapter, Sons of Utah Pioneers, replaces the original plaque erected 23 July 1933, by Utah Pioneer Trails and Landmarks Association and the Vanguard Association of the Salt Lake County, Boy Scouts of America”. 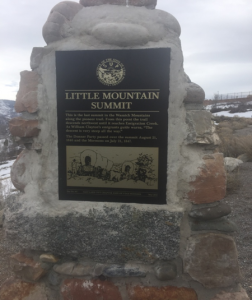 “This is the last summit in the Wasatch Mountains along the pioneer trail. From this point the trail descends northwest until it reaches Emigration Creek. As William Clayton’s emigrants guide warns, “The descent is very steep all the way.”

Big Mountain is a landmark on the Utah section of the Mormon trail. The journey from Nauvoo, Illinois to Salt Lake City, Utah is now known as The Great Mormon Migration[1]. The Mormons embarked on this journey after facing violent religious persecution in both Missouri and Illinois. After their prophet and leader, Joseph Smith was killed in 1844, Brigham Young became the new leader of the main body of Saints and decided to flee persecution and seek a new home in the West.[2] As early as September 1845, Young favored the Salt Lake Valley as a potential new home for his followers.[3]

The Great Basin was attractive to the Mormons because of its isolation. At the time it was still a part of Mexico and largely unsettled. The Great Basin presented an opportunity for the Mormons to escape the religious persecution which they had endured in the United States. Brigham Young liked the idea that it was isolated and not under firm Mexican control, because he hoped no one else would want to settle there. The Mormon migration was thus a journey to escape persecution and find religious freedom.[4]

The Mormon migration began in February of 1846. During the first leg of the journey, Mormons suffered a loss of over 400 people. In response, they decided to stop in Omaha, Nebraska, for the winter. Then, in April 1847, the Mormons continued to the Rocky Mountains. Brigham Young led 142 men, 3 women, 2 children, 72 wagons, and cattle into the Great Basin. The steep, rocky conditions of the last portion of the trail made the migration treacherous.[5] At Fort Bridger, the Mormons took the Donner-Reed trail through the Rocky Mountains and into the Great Basin. The final leg of the trek was the most challenging yet. [6]

After months of climbing steep and rocky terrain, the journey soon came to an end. On 21 July, pioneers Orson Pratt and John Brown saw the Salt Lake Valley for the first time. Orson Pratt was enthusiastic in his assessment:

“After issuing from the mountains among which we had been shut up for many days, and beholding in a moment such an extensive scenery open before us, we could not refrain from a shout of joy which almost involuntarily escaped from our lips the moment this grand and lovely scenery was within our view.”[7]

One day later, after months of hardship and traveling, the advanced party of Mormon pioneers finally looked out over the Great Basin from atop what is now called, Big Mountain. Pioneer Thomas Bullock wrote that they viewed

“the Salt Lake in the distance with its bold hills on its islands towering up in bold relief behind the silvery lake —a very extensive valley burst upon our view, dotted in 3 or 4 places with Timber. I should expect the valley to be about 30 miles long & 20 miles wide. I could not help shouting ‘hurra, hurra, hurra, heres my home at last’—the Sky is very clear, the air delightful & altogether looks glorious; the only drawback appearing to be the absence of timber—but there is an Ocean of Stone in the mountains, to build Stone houses, & Walls for fencing. if we can only find a bed of Coal we can do well; & be hidden up in the Mountains unto the Lord.”[8]

On July 22nd 1847, after a final trek down the canyon, the first emigrant group camped in the Salt Lake Valley.[9]

Brigham Young, sick from Mountain Fever, followed behind and reached Big Mountain the next day. On July 23, his history records,

“I ascended and crossed over the Big Mountain, when on its summit I directed Elder Woodruff, who had kindly tendered me the use of his carriage, to turn the same half way round so that I could have a view of a portion of Salt Lake Valley. The spirit of light rested upon me and hovered over the valley, and I felt that there the Saints would find protection and safety. We descended and encamped at the foot of the Little Mountain.”[10]

Young and his group entered the valley on July 24th and joined the members of the advanced camp who were already plowing the land and planting crops.

Big Mountain is more than just a landmark on the Mormon Trail. Big Mountain marks the first time that the Mormon pioneers witnessed their destination stretched out before them. 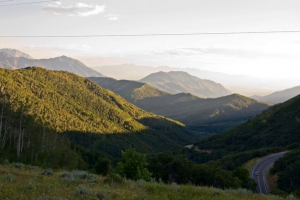 Photo of Emigration Canyon from Big Mountain, 2017, by Grace Fahey

[7] Orson Pratt, “Interesting Items Concerning the Journeying of the Latter-day Saints from the City of Nauvoo, Until Their Location in the Valley of the Great Salt Lake (Extracted from the Private Journal of Orson Pratt),” digital copy, LDS Church History Library, Church of Jesus Christ of Latter-day Saints, Salt Lake City, Utah.

Will Bagley, The Pioneer Camp of the Saints: The 1846 and 1847 Mormon Trail Journals of Thomas Bullock (Logan: Utah State University Press, 2001).