Write up by Charles O. Wolfgramm

Placed By: Daughters of Utah Pioneers 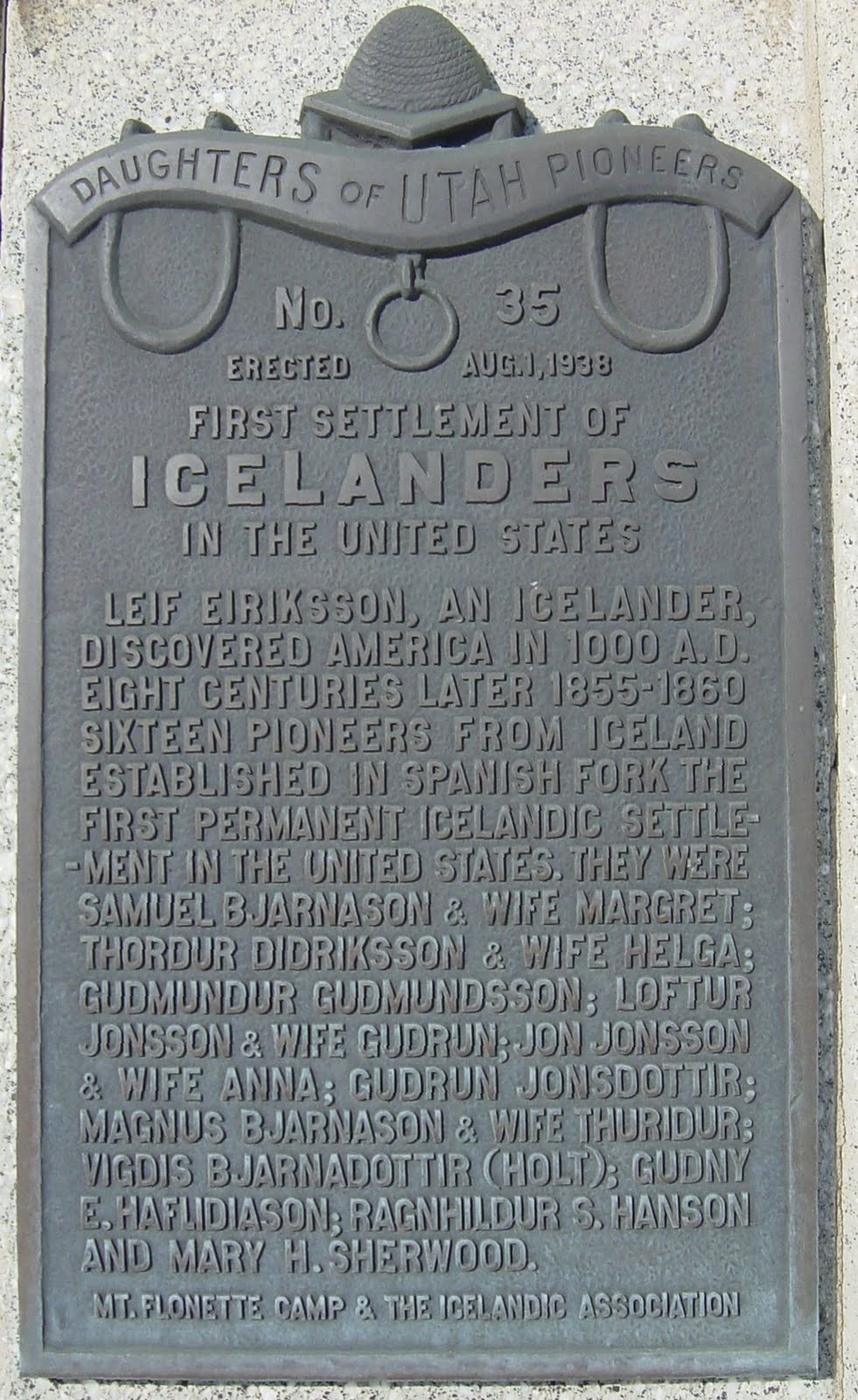 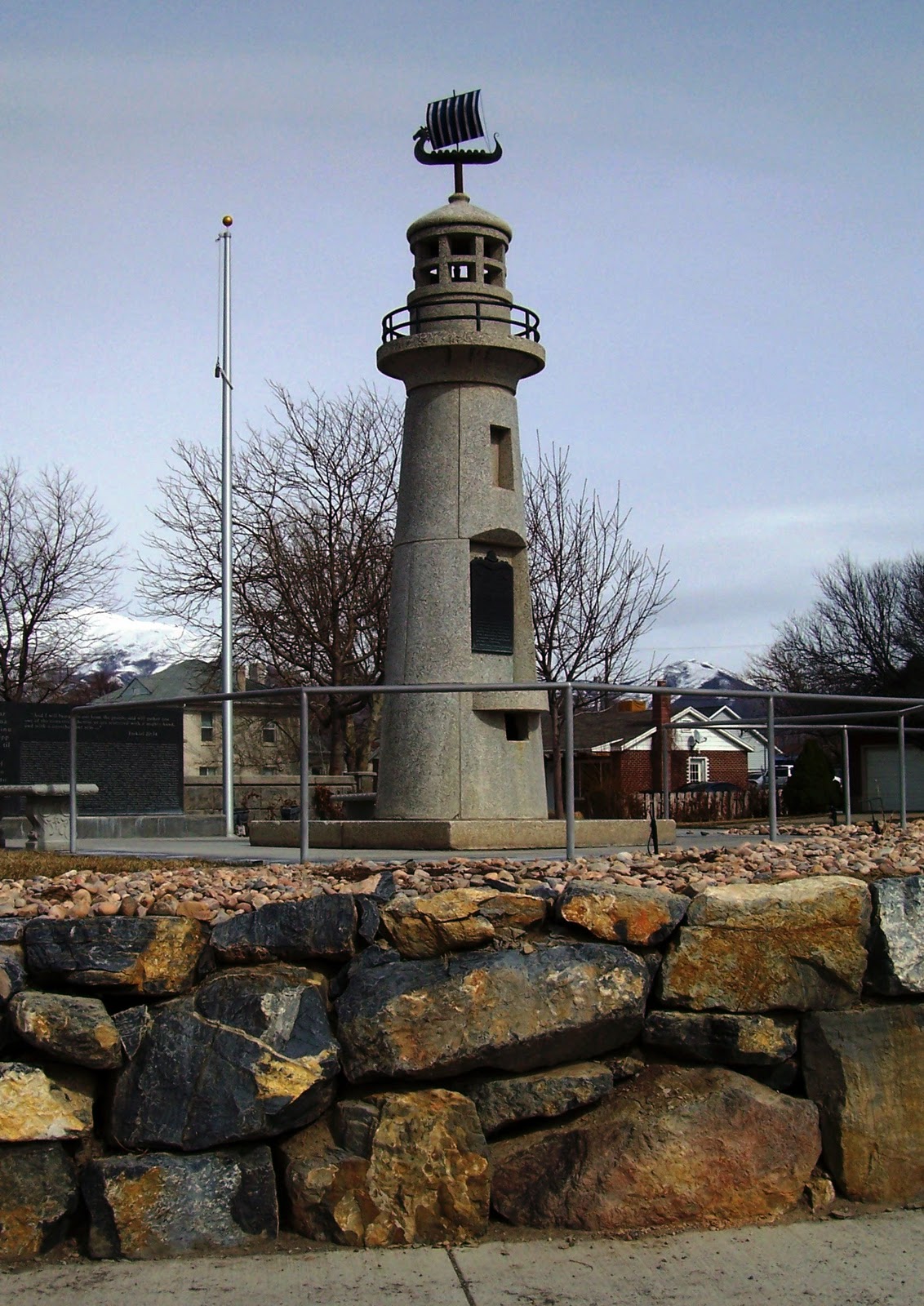 On September 7, 1855 the first immigrants from Iceland arrived in Utah Territory, and between 1855 and 1914 there was a total of 410 Icelandic immigrants that made this journey. All of the Icelandic immigrants that came to Utah Territory were converts to the Church of Jesus Christ of Latter-day Saints, and they were sent by the leaders of the church to Spanish Fork. This was a perfect community for these new Icelandic immigrants because it was already home to immigrants from Scandinavian countries, so they were able to share some common cultural values. The Icelandic marker was placed in Spanish Fork on August 1, 1938 by the Daughters of the Utah Pioneers and the Icelandic Association of Utah. The monument is a lighthouse with a viking ship on top of the lighthouse. There are sixteen names listed as the first Icelandic immigrants to arrive in Utah. Lighthouses are located all over Iceland because of its location in the middle of the northern Atlantic Ocean, so this is an appropriate monument to remember the Icelandic members of the Church of Jesus Christ of Latter-day Saints.

Iceland is geographically isolated from other Scandinavian countries, but similarities between Iceland and Scandinavia still exist. Religion is one example. The Lutheran Church dominates in most Scandinavian countries and this is also true for Iceland where eighty percent of the population are members of the Lutheran Church. Other religions can have a difficult time gaining converts because of the popularity of the Lutheran Church in Iceland. Icelandic citizens might even have to leave the country in order to be exposed to other religious beliefs. This is how Guðmundur Guðmundsson, the first Icelander to join the Church of Jesus Christ of Latter-day Saints, learned of the upstart American born faith. He was born in Iceland, but his conversion happened in Denmark.

Guðmundur was born in 1825 in a farm town in Artun in the Rangarvalla district of the Oddi Parish in Iceland. He was baptized a member of the Lutheran Church a few months after he was born. He left Iceland as a teenager to be educated and pursue a career as a goldsmith in Denmark. While in Denmark he converted to Mormonism. Around the same time, Guðmundur’s childhood friend, Pórarinn Hafliðason, also converted in Denmark. The two friends reunited and were called to survive as missionaries for their new found faith in Iceland.  The new Icelandic converts were not very successful in the mainland of Iceland so they went to an Island called Vestmannaeyjbaer or Westman Island, southwest of the capital Reykjavik, . The two missionaries were able to find many new converts in this part of Iceland but they did face a lot of opposition form the established church in the area. Samuel and Margret Bjarnason, along with Helga Jónsdóttir who were converted on the island by the two native missionaries  were the first Icelandic members to make the move to Utah. Samuel and Margret arrived in Utah on September 7, 1855 and were told by Brigham Young, the leader of the LDS Church to go and settle in Spanish Fork. Scandinavian saints were already in the area and so Brigham Young felt this would be a great place for the Icelandic saints to build a community. Hundreds of Icelandic Saints would eventually make their way to Utah in the following years until about 1914 when WWI began. During this same time the Icelandic Mission of the Church of Jesus Christ of Latter-day Saints was closed due to the war, and general immigration from Iceland ended.

For the next fifty years the LDS Church did not exist in Iceland. In 1977 Iceland was again dedicated for Mormon missionary work to continue. Twenty years later in 1997 the president of Iceland and his wife were invited to celebrate Iceland Days marking the centennial of the first Icelandic members of the LDS Church to settle in Spanish Fork.

Finally on June 30, 2000 a monument was erected with the names of 410 Icelandic Mormons who made the journey from the Westman Islands to Utah Valley between 1857 and 1914.

This monument is a testimony of the faith and dedication of the Icelandic members of The Church of Jesus Christ of Latter-day Saints who sacrificed so much for their beliefs.