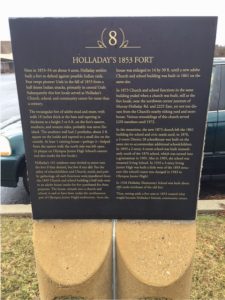 In July of 1847, Holladay became the first village established independent of Salt Lake City. At the time, Latter Day Saints Prophet Brigham Young sent out members of his congregation to colonize different parts of Utah, particularly areas rich in natural resources. Led by John Brown, the pioneers of the Mississippi Company founded the village, flourishing with an abundance of natural resources. A free flowing stream fed through the Holladay area, and provided the rich and fertile lands for farming and planting[1]. The area was known as Cottonwood or the Mississippi Ward, but would be named Holladay after a particularly influential bishop, John D. Holladay. The settlement would grow to include schools, churches, and the creation of a fort in 1853, intended as protection against Native American raids but instead became a place for the settlers to gather. 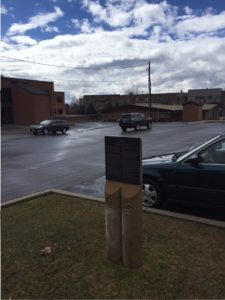 Marker at Approximate Location of Southeast Corner of Holladay Fort

The Mississippi Company itself had known hardship; they had existed in the Southern States Mission, where they were often met with vitriol and physical harm[2]. They had moved west nearly a full year before the Mormon exodus of 1847, wintering at Pueblo, Colorado. Many of its members volunteered to join the Mormon Battalion, formed to aid the United States’ incursion into Mexico: The men and their families knew sacrifice. The struggles that they encountered in trying to fulfill their Prophet’s, and ultimately their God’s, vision created in them a firm belief that they were truly a chosen people destined for eternal greatness. According to various accounts, the Saints of this era met each challenge with the strength of their convictions and the willingness to work together, united in their goals[3]. Pioneers saw obstacles, such as hunger or physical hardship on the trail, as trials to be conquered with the aid of an almighty God. The Mississippi Company acted admirably in much the same way.

The Mormon colonization efforts were remarkable. Because of their strong, central leadership and the complete cooperation of their congregations, a community infrastructure could be quickly established that led to economically competent planning, ensuring a town’s immediate survival. One can see the precision of the Mormon colonization machine in the fact that Holladay was founded only a month after the Brigham Young’s famous incursion into the Salt Lake Valley. The tenacity of their efforts would further be reflected in the founding of the San Bernadino Mission in California (1851) by some of the members of the Mississippi Company.

Six years after the Mormon migration of 1847, Chief Walker of the Ute tribe declared war on the Mormons in the valley, in immediate retaliation for the death of a Ute Indian in a small conflict in Utah Valley, and for the larger reason that the Mormon people had encroached on his tribe’s lands and did not seem to have any intention of letting up in their colonization efforts. While this is called the Walker War, there was not much conflict: it was mainly a series of Indian raids and small Mormon reprisals. There were no great battles and a peace would be declared in May of 1854, with few conciliatory negotiations to resolve the ideological conflicts between the two groups.[4]

About the Holladay Fort:

However, the fear of Indian attacks led to the creation of the Holladay Fort in 1853 (it is very likely that it was never completely finished). Built from adobe mud and straw, it provided some protection but the Indian threat (the attacks were focused mainly in central Utah) was not enough to convince Holladay’s 161 inhabitants to move in. A house within its walls would serve as the meeting place for school and church functions in the area, until a new school/church would be built on the fort grounds in 1861.

In 1873, a new church, separate from the school, was built on the grounds. This church would serve LDS needs until 1972. In 1876, a new school was constructed on the fort site, accommodating school children until 1893, when another school was constructed just south. This 2-story, 4-room school would become a gymnasium for the 3-story, newly renamed Irving Junior High School, created in 1905. Irving Junior High was built to the west of the 1893 building (the gymnasium) and would be renamed Olympus Junior High in 1943. 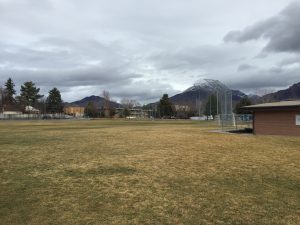 Olympus Junior High would be torn down in 2002 to make way for a new school, moved slightly to the west of the original site. Today the grounds of the fort roughly encompass the entirety of the field used by the school, in addition to a small business and the LDS seminary building that Olympus Junior students regularly attend. Despite resistance to the westward move[5], the new building has become a community landmark and important facet of family life in Holladay itself.

The creation of the Holladay Fort in 1853, while not initially significant, set aside an area that would become culturally and socially important to the community for nearly the next 100 years. Out of regional fears, the fort was designed to keep raiding Utes out and yet it proved to be a joyful place where the community gathered to celebrate their own culture and to continually devote themselves to their religion. By housing the educational and spiritual centers of Holladay, the fort provided the means for Mormon culture to survive and grow, fed by Spring Creek in the shadow of Mount Olympus.