Write up by Paul McKnight 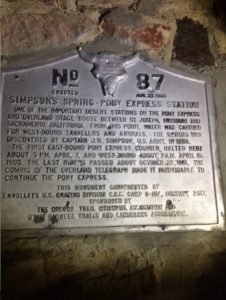 One of the important desert stations on the Pony Express and overland stage route between ST. Joseph, Missouri and Sacramento, California. From this point, water was carried for west-bound travelers and animals. The Spring was discovered by Captain J.H. Simpson, U.S. Army. In 1858, the first east-bound Pony Express courier halted here about 5 P.M. April 7, and west-bound about 2 A.M. April 10, 1860. The Last riders passed about October 22,1861. The coming of the overland telegram made it inadvisable to continue the Pony Express. 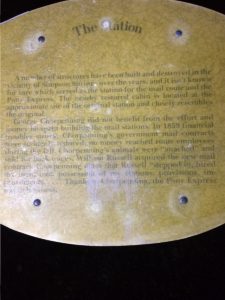 A number of structures have been built and destroyed in the vicinity of Simpson Springs over the years, and it isn’t known for sure which served as the station for the mail route and the Pony Express. The nearby restored cabin is located at the approximate site of the original station and closely resembles the original.

George Chorpenning did not benefit from the effort and money spent in building the mail stations. In 1859 financial troubles struck. Chorpenning’s government mail contracts were suddenly reduced; no money reached route employees during the fall. Chorpenning’s animals were “attached” and sold for back wages. William Russel acquired the new mail contract. Chorpenning notes that Russel “stepped in, took possession of my stations, provisions, improvements…” Thanks to Chorpenning, the Pony Express was in business. 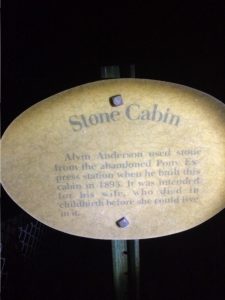 Alvin Anderson used stone from the abandoned Pony Express station when he built this cabin in 1893. It was intended for his wife, who died in childbirth before she could live in it.

The Pony Express was established in April of 1860. The idea behind the Pony Express was to establish an overland mail route between Joseph Missouri and Sacramento California. During this time, transporting mail and information from one side of the U.S. to the other proved too time consuming. The mail and other information was placed on a boat which sailed around to California. This could take weeks if not months. By the time the news arrived, it was too old to even matter. Therefore, the Pony Express was considered to be a better alternative to a long voyage.

William H. Russel, Alexander Majors and William B. Waddell started what at the time was known as the Leavenworth & Pike’s Peak Express Company. The postmaster general, Joseph Holt requested their services. The people who rode the Pony Express could achieve 1800 miles between Joseph, Missouri and Sacramento, California in just ten days. This definitely cut down the time it took for a ship to sail around the world. While the information transported was still not very current, it sure was more up to date than the news which came to California by ship.

“. . .The next day he [Mr Slade,the manger of Cody’s Pony Express station] assigned me to duty on the road from Red Buttes on the North Platte, to the Three Crossings of the Sweetwater – a distance of seventy-six miles – and I began riding at once.

One day when I galloped into Three Crossings, my home station, I found that the rider who was expected to take the trip out on my arrival had got into a drunken row the night before and had been killed; and that there was no one to fill his place. I did not hesitate for a moment to undertake an extra ride of eighty-five miles to Rocky Ridge, and I arrived at the latter place on time. I then turned back and rode to Red Buttes, my starting place, accomplishing on the round trip a distance of 322 miles.

Slade heard of this feat of mine, and one day as he was passing on a coach he sang out to me, ‘My boy, you’re a brick, and no mistake. That was a good run you made when you rode your own and Miller’s routes, and I’ll see that you get extra pay for it.’

Slade, although rough at times and always a dangerous character – having killed many a man – was always kind to me. During the two years that I worked for him as pony-express-rider and stage-driver, he never spoke an angry word to me.

As I was leaving Horse Creek one day, a party of fifteen Indians ‘jumped me’ in a sand ravine about a mile west of the station. They fired at me repeatedly, but missed their mark. I was mounted on a roan California horse – the fleetest steed I had. Putting spurs and whip to him, and lying flat on his back, I kept straight on for Sweetwater Bridge – eleven miles distant – instead of trying to turn back to Horse Creek. The Indians came on in hot pursuit, but my horse soon got away from them, and ran into the station two miles ahead of them. The stock-tender had been killed there that morning, and all the stock had been driven off by the Indians, and as I was therefore unable to change horses, I continued on to Ploutz’s Station – twelve miles further – thus making twenty-four miles straight run with one horse. I told the people at Ploutz’s what had happened at Sweetwater Bridge, and with a fresh horse went on and finished the trip without any further adventure.”

On June 16, 1860 congress approved the construction of a telegraph line which would connect the west coast with other lines in Missouri. Thus, in October of 1861 the Pony Express was deemed obsolete and unnecessary. The travel was dangerous, the rides were long. The Pony Express station at Simpson Springs was just one of many stations along the route to California. Riders would arrive at this station and either another rider would continue the ride or the same rider would switch horses and continue riding to the next station. The arrival of the telegraph put an end to the hazardous transfer of information. This station at Simpson Springs served as one of many stations used by members of the Pony Express such as Buffalo Bill. Such stations provided security, food, and fresh horses for incoming riders.