Write up by Jesse T. Hassard 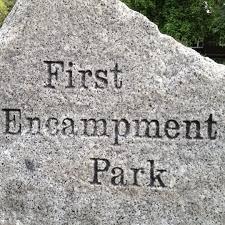 Placed by: Daughters of the Utah Pioneers

“First Encampment in the Salt Lake Valley. Daughters of Utah Pioneers. On July 22, 1847, the main body of the Mormon Pioneer Company, along with a few of the Mormon Battalion sick detachment and some of the Mississippi saints, camped near this location. After leaving Emigration Canyon, the group traveled in a southwesterly direction along the south side of Emigration Creek. Near where Emigration and Parley’s Creeks come close together, they camped. Thomas Bullock, the company clerk, recorded in his journal, ‘We descended a gentle sloping table land to a lower level where the Soil and grass improved in appearance… The Wheat Grass grows 6 or 7 feet high, many different kinds of grass appear some being 10 or 20 feet high – after wading through thick grass for some distance, we found a place bare enough for a Camping ground, the grass being only knee deep, but very thick; we camped on the banks of a beautiful little stream [Parley’s Creek] which was surrounded by very tall grass…’ Orson Pratt and his exploring expedition, who entered the valley earlier that morning, joined the camp in the evening. A council was held and the decision was made to move the next day to a site they had chosen to plant crops, on City Creek two miles to the north. Brigham Young, whose small party was delayed because of illness, did not enter the valley until July 24, going directly to the camp on City Creek. When surveyed, the area of the first encampment became part of the ‘Big Field’ farming plat. Among those with farms here was Wilford Woodruff, whose two houses still stand a half block north of this site. Beginning in the 1890s, the area was platted and subdivided for residential development. Parley’s Creek still flows through the neighborhood in an underground conduit. 1997. No. 509. Salt Lake Liberty Park Company.” 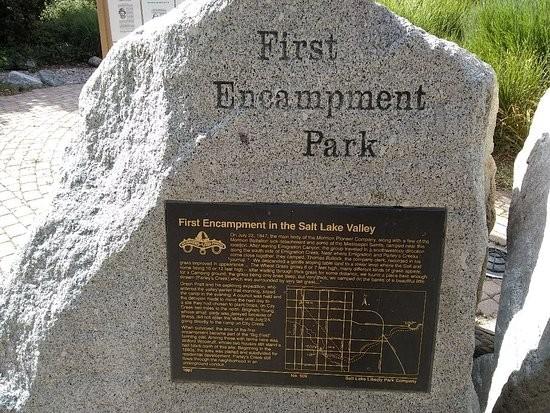 A mounted plaque on the south monument says: “How the Park Came to Be. This park grew from what began as a Federal Heights Ward sesquicentennial project – a simple monument to mark the first Mormon campsite in Great Salt Lake Valley. The vision expanded, and the park became a joint project of the Emigration and Wells Stakes of The Church of Jesus Christ of Latter-day Saints, bringing to reality a dream of the neighborhood and the historical community. Engraved on stones throughout the park are names of the 109 men, 3 women, and 8 children thought to have slept here that first night in the valley, July 22, 1847. The park design represents the landscape they encountered. Granite boulders mounded in the eastern part represent the Wasatch Mountains. The path through the mountain rocks represents Emigration Canyon, down which the Pioneers came. The dry streambeds represent Emigration and Parley’s Creeks. Primary children of the two stakes embedded pebbles in the fresh concrete of the streambeds. In addition to thousands of hours of volunteer labor by both stakes, the park was made possible by American Oil Company’s generosity in the donating the land and by liberal financial support, primarily by members of Emigration Stake. Contributing firms and organizations included Daughters of Utah Pioneers, Kelby Electric Company, Oakland Construction Company, Clean Cut Landscaping, United Fence Company, Lehi Block Company, Howe Rental, and others. Landscape Architect Stuart Loosli created the design and, with Mark Finlinson, managed construction. William B. Smart was general chairman. Dedicated by Elder M. Russell Ballard, July 22, 1997, exactly 150 years after the arrival of the pioneers here. Presented as a city park to the people of Salt Lake City and to all who honor our pioneer heritage.”

Mormons were violently persecuted and pushed from Ohio to Missouri, from Missouri to Illinois and from Illinois, they were pushed west outside the bounds of the United States to northern Mexico. After Joseph Smith, the founder of the faith, was murdered in Illinois, Brigham Young, the faith’s new leader decided to move his people into unclaimed lands in northern Mexico. In 1846, members of the LDS church then began their long journey across the United States and into the Rocky Mountains. After spending the winter in present-day Nebraska, Brigham Young led a vanguard group into the Salt Lake Valley in July 1847. During the long journey, however, the Mormon wagon train was broken up into two different groups. The group that would continue into the Salt Lake Valley totaled 42 men and 23 wagons. They would be the first Latter-day Saints to reach the Salt Lake Valley, two days ahead of  Brigham Young who stayed behind because of an illness he was suffering from.1

The advanced party followed the Hasting’s cutoff trail blazed by the ill-fated Donner Party the year before. Three other groups also tried Hasting’s cutoff in 1846 but entered the valley through Weber Canyon.  The Donner Party instead pioneered a path through Emigration Canyon which the Latter-day Saints followed one year later. After leaving Emigration Canyon, The LDS pioneers traveled southwesterly along Emigration Creek till they reached a bank positioned where Emigration and Parley’s Creeks come close together. Thomas Bullock, the pioneer company’s clerk, wrote, “We descended a gentle sloping tableland to a lower level where the soil and grass improved in appearance.”

The Mormons had finally arrived in the Salt Lake Valley. Thomas Bullock described the campsite in his journal: “… after wading thro thick grass for some distance, we found a place bare enough for a camping ground, the grass being only knee deep, but very thick; we camped on the banks of a beautiful little stream which was surrounded by very tall grass.”

The original landscape of the area that would become the first encampment park is described as very beautiful as stated by Bullock: “we found a place bare enough for a Camping ground, the grass being only knee deep but very thick. We camped on the banks of a beautiful little Stream; which was surrounded by very tall grass. in digging a place down to the stream. cut thro’ a thin bed of Clay. After about a foot depth of rich soil; then rich soil again.” The camp was reportedly very sound and was located close to the present-day intersection of 1700 South and 500 East, in modern-day Salt Lake City.

This makes the First Encampment Park the approximate location where the First Pioneer Company of the Church of Jesus Christ of Latter-day Saints camped when they first arrived in the Salt Lake Valley on July 22, 1847. The group included three enslaved men, Green Flake, Hark (Lay) Wales, and Oscar (Crosby) Smith. Their Latter-day Saint enslavers had sent them ahead to prepare cabins and to plant crops so that the white enslavers would have a place to live and food to eat when they arrived the following year. African American Slavery thus arrived in the Salt Lake Valley two days ahead of Brigham Young.

On July 24, 1847, Brigham Young arrived at the second encampment two miles north, close to City Creek, where they began to grow crops and establish a layout of the new city they would build.

In 1997, 150 years later, community leaders established a small pocket park at the first encampment location, now known as the first encampment park. Its granite stone landscape bears the names of the first pioneers to arrive and represents the Wasatch Mountains and Emigration Canyon through which they traversed. This monument is a representation of the hardships and sacrifices of the Mormon pioneers. It details their journey across the mountains into the Salt Lake Valley. This place is the end of their long journey and the first place in the Salt Lake valley that they camped. For this reason, this marker is very significant in the history of Utah, much like Plymouth rock and its importance as the beginning of the United States. The first encampment park serves as the beginning of the Mormon story in Utah; it represents the beginning of Euro-American settlement in the Salt Lake Valley. Latter-day Saints hoped to be free from outsiders or others that would threaten to run them out of their houses and change their lives. The First Encampment Park represents the end of the Latter-day Saints’ long journey and the beginnings of their new settlement.