Placed By: Division of State History 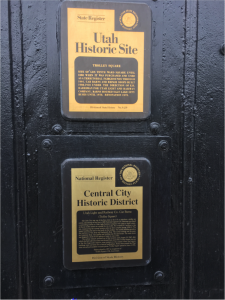 Site of LDS Tenth Ward Square until 1888 when it was purchased and used as a territorial fairgrounds through 1901. Car Barns and Repair shops built 1908-1910 under the direction of E.H. Harriman for Utah Light and Railway Company. Barns housed Salt Lake City Buses until 1970. Renovation 1972.

Salt Lake City was one of the first cities in the U.S. to introduce a trolley car system, electrifying its first line in 1889. Railroad magnate E.H. Harriman purchased a controlling interest in Utah Light Railway Company with plans to build a state-of-the-art trolley system as a model for the world. He invested $3.5 million in this site, constructing the unusual mission-style car barn complex during 1908-10. The largest building was used as the berth for the trolleys. The middle building served as a machine or “rip” shop and blacksmith shop. The north building was the paint and carpenter shop. The smaller east building was the sand house. The water tower was designed to hold 50,000 gallons of water in case of fire.

The railway venture operated out of this location until August 19, 1945, after which the Salt Lake City buses were housed here until 1970. Trolley Square was one of the first large-scale adaptive reuse projects in the country when the historic buildings were converted into a festival marketplace. Relics from around the West were rescued and installed as accent pieces. Trolley Square opened in June of 1972. 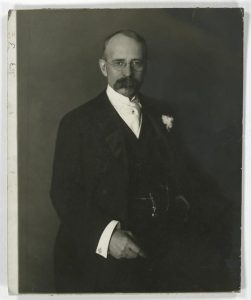 Trolley Square was initially the site of the LDS Tenth Ward, designated by Brigham Young in 1847. Salt Lake City purchased the site in 1888 and used it as a fairground until Edward H. Harriman, a railway tycoon, purchased it in 1908. In 1907, shortly before Harriman’s purchase of the Trolley Square area, he was called into the Supreme Court. Harriman’s stake in the railroad system throughout the United States and specifically Utah had raised the concern of the Interstate Commerce Commission. Harriman was charged with holding a great deal of questionably acquired stake in a number of railroad companies incorporated in Utah. Harriman appealed this in 1908 shortly after his purchase of Trolley Square, but the court ordered him to testify and answer questions he previously refused to answer.1 He was, at the time, attempting to build a railroad empire and was in the process of acquiring the Trolley Square area in order to create the Salt Lake City streetcar system.

Harriman also purchased the Utah Light and Railway Company, in which he invested around $3.5 million. Harriman wanted to create an electric light rail system for the rest of the world to use as a model for inexpensive public transportation. In the following years Harriman oversaw the construction of car barns, a 50,000-gallon water tower, and maintenance buildings while also investing in the construction of a light rail system in the Salt Lake City area. This investment was only a small portion of his involvement in railroads in the western United States, as Harriman is primarily known for his involvement in the Union Pacific Railroad Company.

The car barns and other maintenance buildings that Harriman constructed were used for their intended purpose for only a little over a decade. The trolley system was short lived in Utah due to the introduction of gasoline-powered buses that did not require tracks to be run throughout the city. Harriman succeeded in making the Salt Lake City Trolley system incredibly successful, if only for a short time. By 1914 more than 144 cars were in operation, and this system served as a model for similar systems throughout the United States. 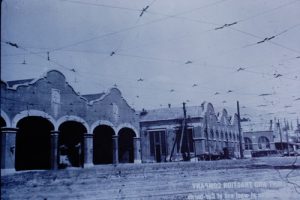 Though the trolley system spread throughout the Salt Lake Valley and was largely successful, it began to be phased out in 1920 as a result of the incorporation of gasoline powered city buses. These buses cost less money to operate and could travel around the valley more efficiently as they did not need tracks or electricity. The last trolley car was retired in 1945, and after that Trolley Square was used as a bus depot. As time went on the buildings fell into disrepair, housing run down and broken buses as well as other industrial garbage and waste. The buildings were going to be demolished in 1969, but developer Wallace A. Wright Jr. purchased the site and renovated it into a shopping center. It has remained a shopping center since it opened its doors in 1971, and in 1996 it was added to the National Register of Historic Places.2